Love burgers but wish they weren’t loaded with all those heavy carbs?  This recipe delivers the taste without all the extra bread.  Get excited for this one, its the bomb.  Summer is THE time for burgers, and the season isn’t over just yet ;-).  Lets milk burger season for all its worth, eh?  Enjoy this healthier but just as mouthwatering rendition.

I roasted the mushroom caps in the oven at 350 degrees F for about 15-18 minutes.  Drizzle a bit of olive oil on top of them.  Sprinkle with some salt and pepper.  Then put in the oven on a cookie sheet that’s lined with baking paper.  They come out awesome.

For the burger part, I know this is a bit of a cheat but I used a premade black bean patty.  However, the sky’s the limit.  You could use a cooked chicken breast filet.  I’ve had that before with this very recipe-awesome.  You can go with a traditional beef burger patty.  Another veggie burger variety.  Even a salmon patty.  Have some fun with it and get creative!  All of it will taste awesome.

This recipe is grain/gluten free, dairy free (aside from the negligible amount of cheese in the pesto, and if you decide on adding cheese to your burger, its of course no longer dairy free) and sugar free.

Whatever patty/protein you’ll use as the main part of the burger (veggie burger, chicken, beef, salmon, etc)

A handful of spinach

Some sliced bell pepper (I recommend either red, yellow or orange because personally, I hate green peppers 😉 but if you like the green guys too, go for it)

*This recipe serves one person.  For two people, double the first three ingredients. 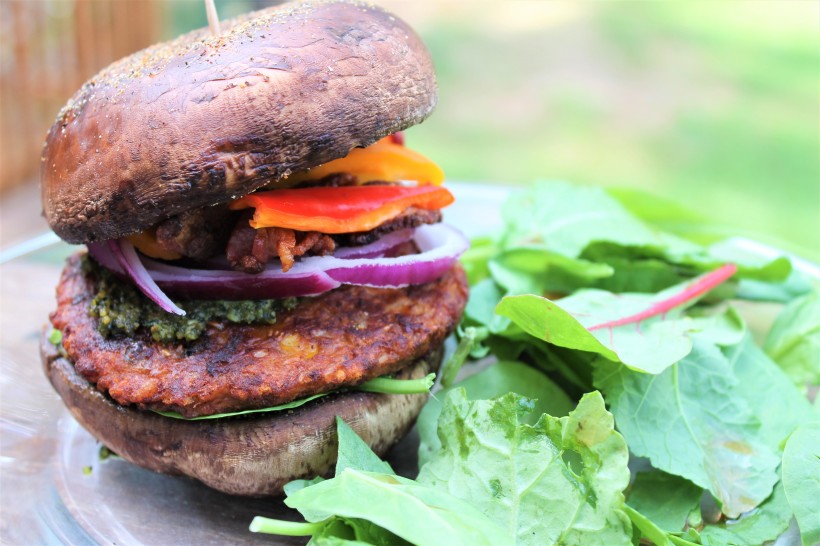